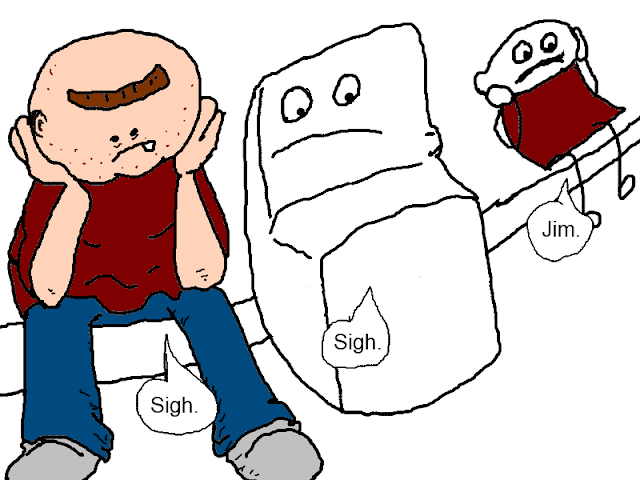 Always bringing me down.

Anything I do that I am even remotely proud of, and the whisper starts.

You suck. You suck you sucky suck suck failure man.

How does someone even get an interior voice like that?!?!?

What the hell....mom and dad? Evolution? God and/or Pantheon of gods?! NutraSweet?!?!?

WHAT THE HELL ALL OF THE ABOVE, MAYBE, NOT SURE, HEDGING MY BETS SO I WILL BE RIGHT REGARDLESS OF OUTCOME?!?!?! CAPITAL YELLING!!?!??!

It's so invasive too, like things you didn't even think you could be critical of yourself for, and it's right there, fucking up the program.

You don't really like that band, you sucky fake. You just like it because the lady on the radio said it was good.

Really? That's really how you're going to walk across the street?

Could you chew your apple like anymore of an asshole?!?

Wait a second wait a second...are you telling me you are going to stand that close to the mirror when you floss? That close? You're like a..like a plaque spraying embolism....

You don't even know what an embolism is.

You are dumb. And worthless.

If I had an amazing imagination, tons of time, and boodles of talent, I would draw you a rendering of what exactly I picture this interior voice as looking like. 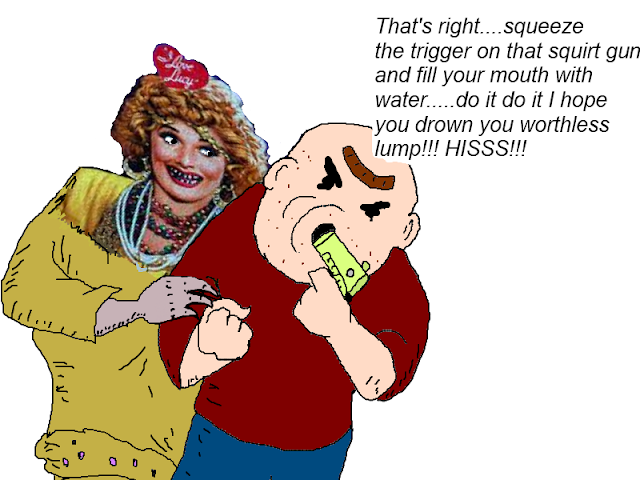 Someone told me that it was sad that I killed off Jim's steed, so I gave him another one.

But I don't want to have to redraw that horse over and over again, so I simplified it a bit. 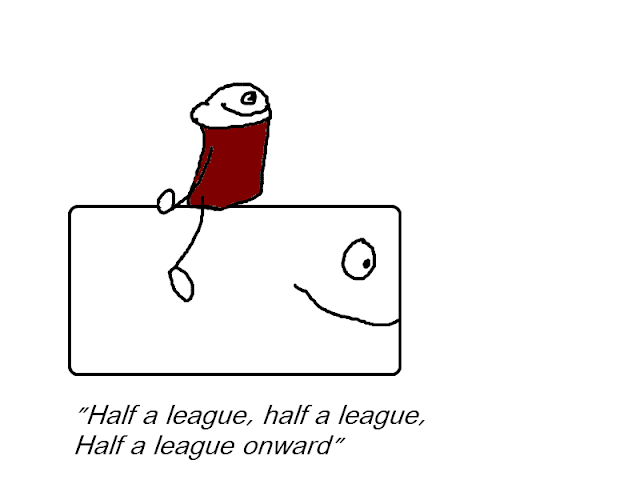 I am rather proud of the design. It's kind of an elongated square.

If the story is just going to be silly, then "Jim Dandy to the Rescue" will be it's theme song. Go, Jim Dandy. Go.

But if it manages to become a serious fantasy epic that stretches into multiple volumes and spins off into its own trading card battling game, then it's theme will probably be from Fantasia (the boobie scene) or anything by pre-Phil Collins, post-Peter Gabriel Genesis, during the time when nobody sang and the whole band just sort of waited around.

That's the worst Genesis joke I have ever heard.

You should know by now I am never gone for long.

Well please go away, I have a lot of topics I need to discuss and you are a real downer.

Anyways, there is really quite a bit I want to say about character design.

First, lets define character design. It is the act of coming up with a character that you then put on things like paper or small pocket books.

When designing a character, there are so many things to consider, but all of them boil down to please don't be terrible at it. 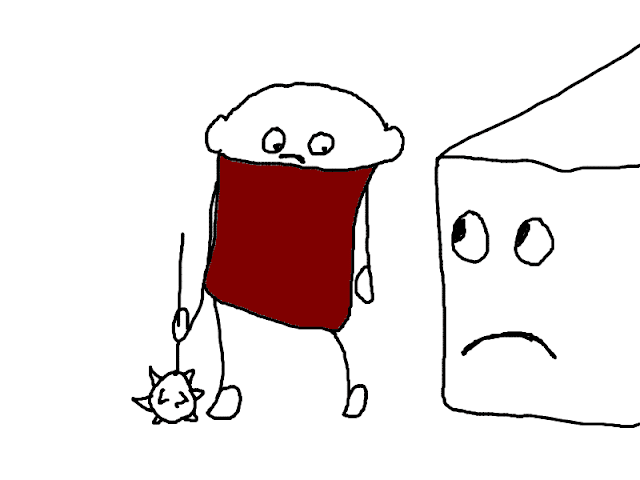 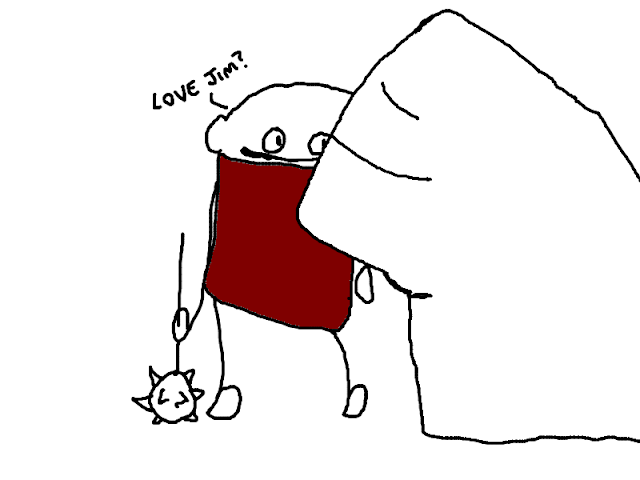 It is a fact that the Japanese are way better at character design then white people. Just ask anyone who feels exactly the same way I do. Don't ask someone who believes differently, though, because then you will have to weigh both sides of the issue, do research, form thoughts....it's just a big pain and I want to make things easier for you.

Let us test my thesis statement: 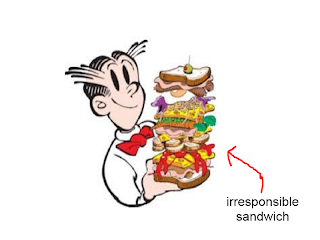 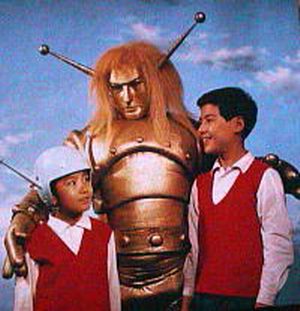 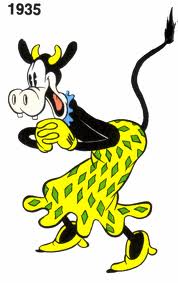 Clarabelle Cow
Well, no need to flog the horse. You concede my point.
But here is an amazing secret about me: my great-grandfather was 100% Japanese. That means I am part Japanese. Which means part of me is really good at character design. I just hope it is my brain part.
So after the utter failure of Jim, I think I will do way better designing Jim's enemies.
Because they are monsters.
I really like to draw monsters. I wish I got to draw them on my blog all the time.
Dragons are very easy to draw. Start with a closed-eye smiley face: 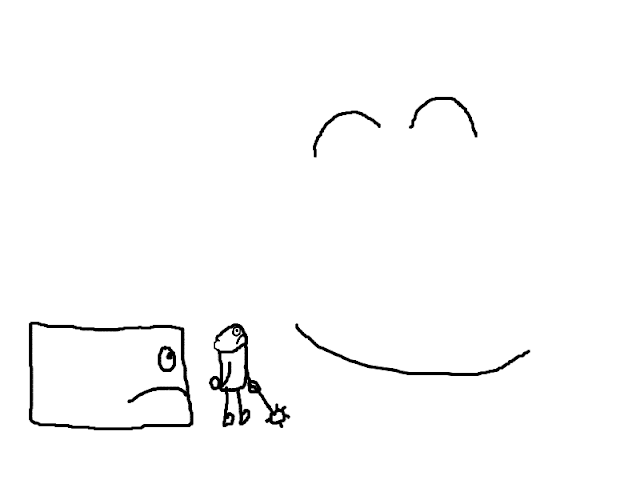 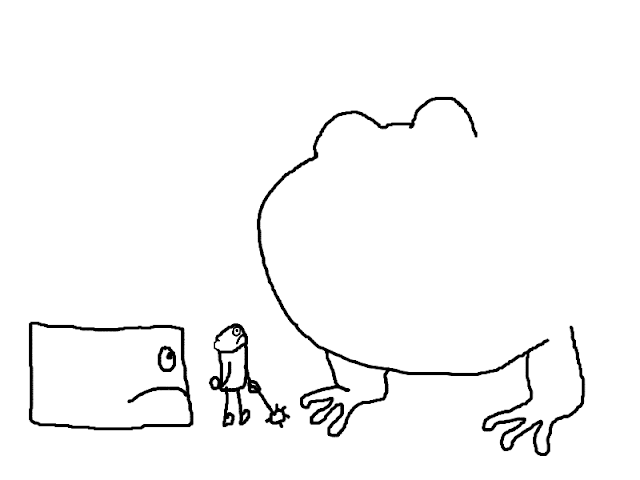 Now put in the final details, like the whole rest of the body, alternating up-and-down pointy teeth, and horrific eyes: 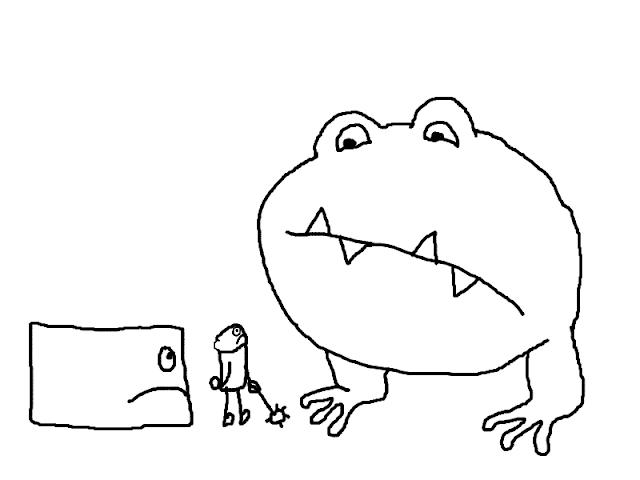 It takes practice, but you'll get there.

I drew my dragon in my notebook while I was watching the students clean the shoe store.

A woman trying on shoes walked past me, and I noticed her sneak a glance at my picture. I could not read her expression, but she got me to thinking how interesting it is to watch people try on shoes.

I like it when people just put on one of the shoes they are thinking about buying, and then walk around the store, staring straight ahead. Sometimes you can hear them talk a bit to themselves. The expression on their faces reminds me of watching a baby fill a diaper; it is very serious and focused on what it is feeling.

They have a funny shuffle to their walk because they are only wearing one shoe.

I really like it when old guys come in. They don't walk around at all. They just sit on one of the mirrored stools and put on one of the shoes they already knew they were going to buy. It is black with a nice dependable rubber heel. It is made in the U.S. of A. They put on the shoe and let out a sigh. Sometimes, their posture is really excellent.

If I age, I hope it is with excellent posture and no use for drawn out shoe purchases.

Who am I kidding; I don't purchase shoes. I wear them until the bottom flaps all around like a giant lip. It makes me fall sometimes.
I tried to fix them with Elmer's glue. It made a neat glue sandwich but it barely worked. Then I tried super glue and other over the counter adhesives. Now my shoes are like new.

My point is, if I walked through an ankle high puddle of Goo Gone, I would come out the other side barefoot. But the convoluted series of events that would have to take place for a puddle of that magnitude to appear in my path seems highly unlikely.

You just wrote 500 words about shoes. What is happening. 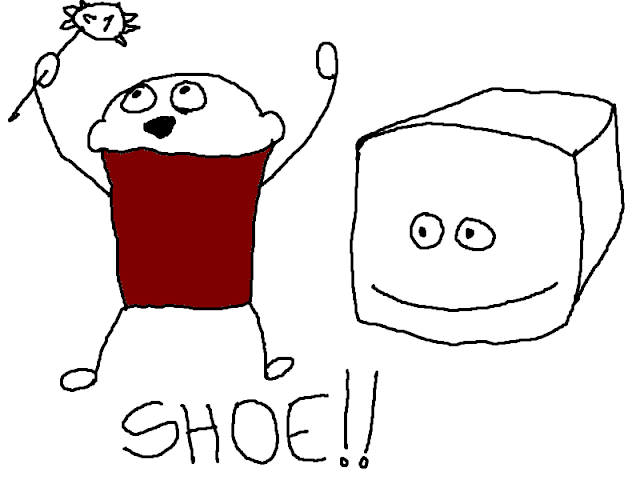 Thanks, Jim, it seems like you meant that bellow to be supportive.

How does it feel, your only friend is a rectangle-riding simpleton that lives in your imagination? You really are the worst.

And did you get that library job?? Even an interview?

I'm not surprised. When was the last time you actually achieved anything, anyways??

This past year. I stopped smelling my finger; that was something. I have struggled with smelling my own finger since the 80s, when I accidentally grabbed a handful of fresh garlic and could not get the smell off my hands. I just kept sniffing it, like this: 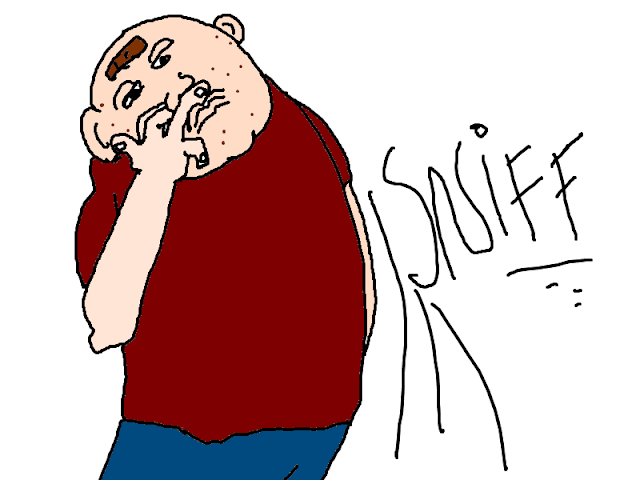 The garlic faded, but it was too late. The monkey was on my back.

I would always trap the ring finger under my nose with my upper lip. Women have told me it is the sexiest thing they have ever seen, and then those women have dissipated with the wind because they were imaginary.

Actually, I had no idea I even did it. Sometime around 1989, a neighbor friend pointed it out to me.

"Why do you always smell your finger like that?" 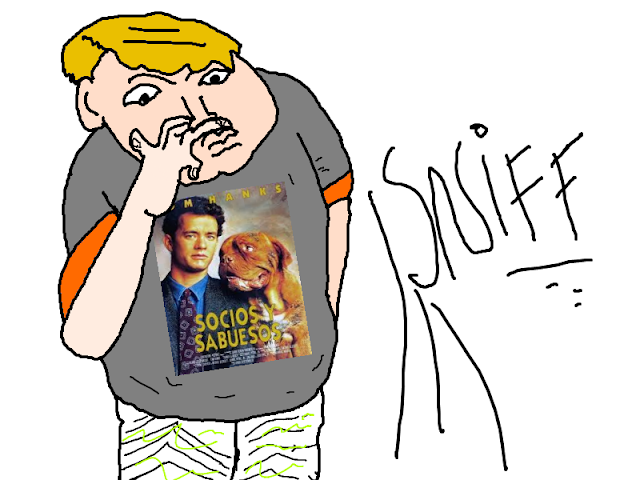 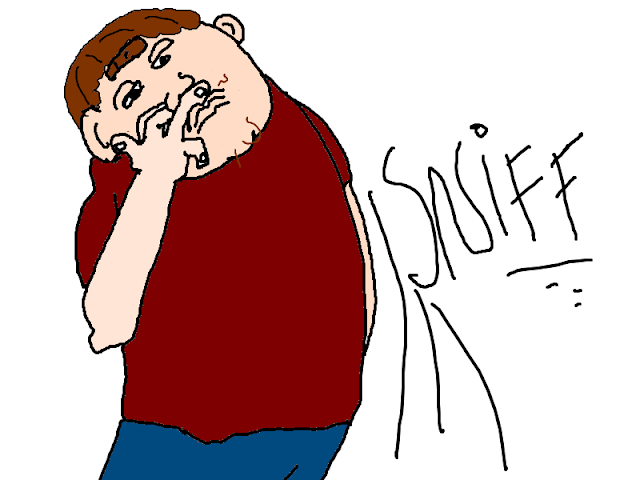 What followed was an idiotic display of simple primate behavior. 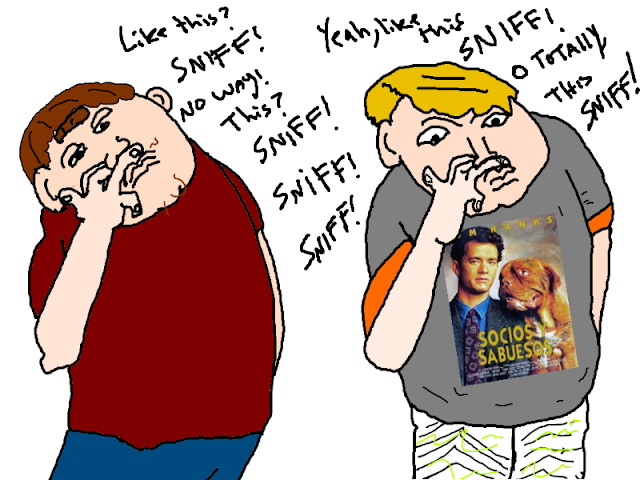 After awhile, I was just pretending to be incredulous; I was in it for the sniffing.

I am not going to even admit that I listened to one second of your ridiculous story.

But if I had listened, I suppose the natural thing now would be to ask, 'how did you eventually quit'?

I told myself that I could still sniff, but every time I did, I had to watch myself do it in whatever reflective surface was near at hand.

After I made that resolution, I sniffed exactly one more time.

That was all she wrote. I was so horrified by the obese Capuchin monkey in the mirror that I walked away from it and never looked back.

If you have a bad habit that you love, never watch yourself or a video of yourself doing it. Except smoking, which is always cool and beautiful. 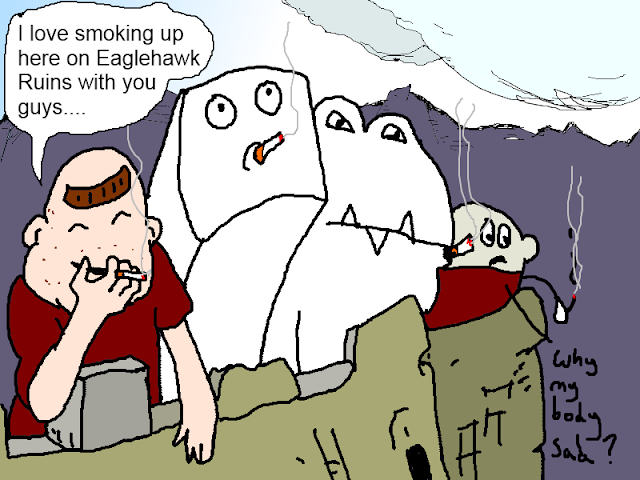 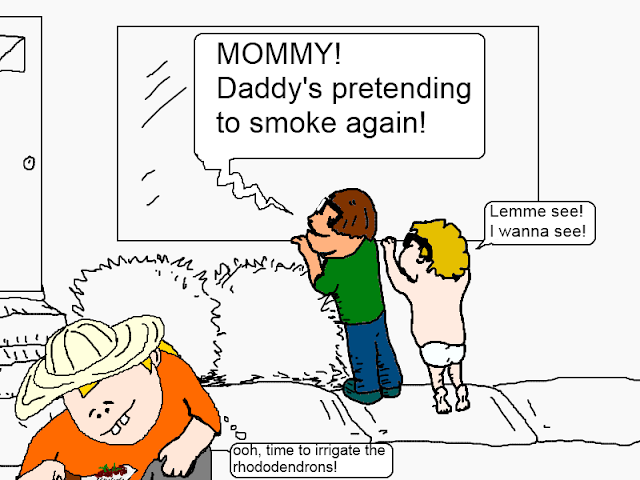 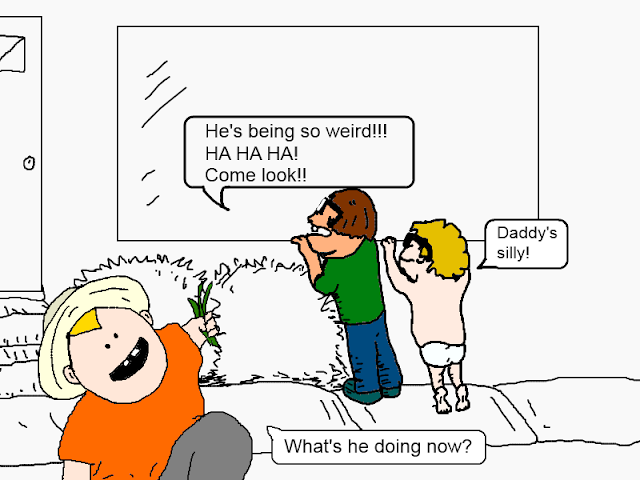 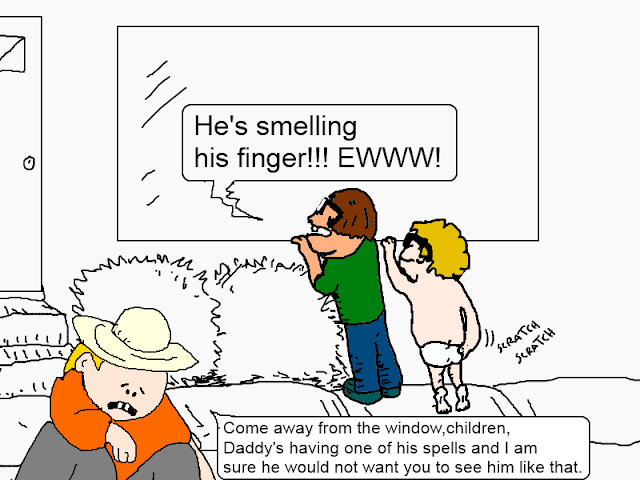 You are worthless. Have a nice day.