Well, I broke up with my therapist recently.

It might've been around Christmas...can't remember.

My thinking is so cloudy and muddled lately; maybe I should start smoking again.

Ironically, I felt very clear-headed when I smoked.

It is ironic because it is smoky.

Anyways, I broke up with him in a manner befitting the terror-filled donut that I've let myself become. 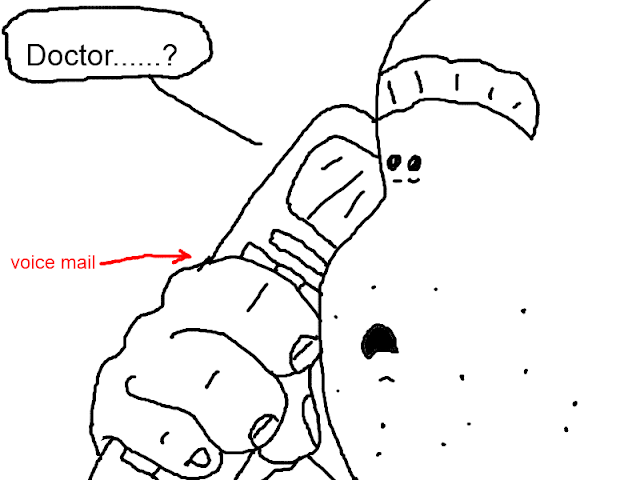 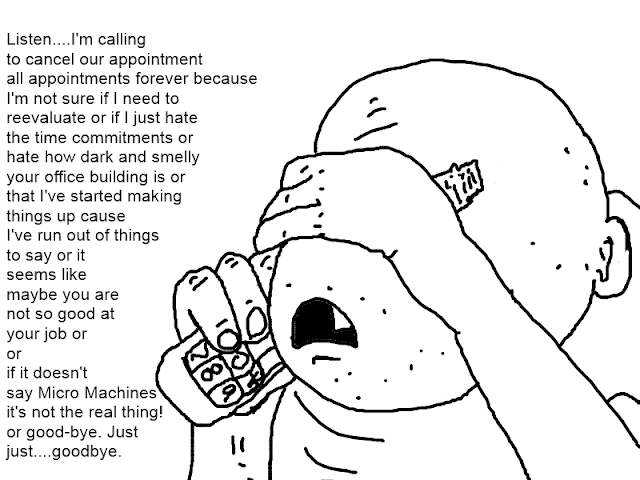 Then I did my tension reduction teeth grit seizure I do when I'm on the phone and I can't take it anymore.

I hung up the phone and went into the basement to play toys.

We have one of those caller IDs that shout out the source of the incoming call, but pronounce it all wrong like a really stupid robot.

You still have to get off of your bottom and check the number visually, which defeats the purpose of having any kind of talking machine.

It proclaimed his number: "U NIV OF MO EYE ITCH AGAIN".

It was irrational fear; he was not a mean or a gruff man. In fact, I do not even know if his face registered any other emotion but empathic listening. 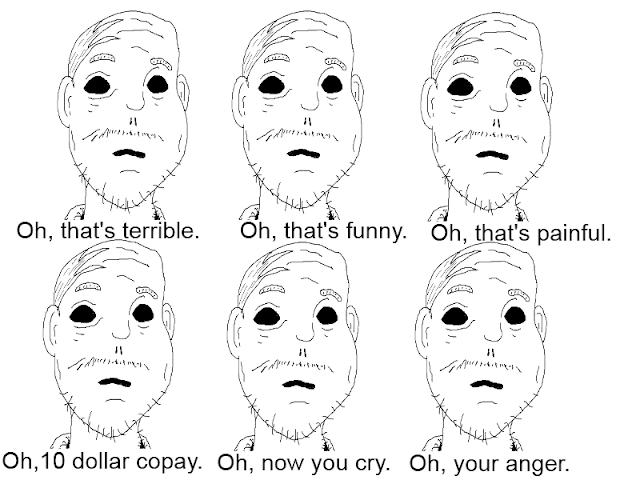 When he yelled at you, it was like being gently chided by Droopy Dog for not loving yourself enough.

But I could not put down my action figures and go get the phone.

I just could not.

Please have no illusions about me: I am fully aware that these are terrible, heartbreaking days in which we live; that the daily news has become a log book of what cannibalistic bastards humanity has chosen to be.

I never forget that, or lose perspective on how ridiculous it is that I cannot face obstacles head on like a corporate CEO or take the bull by the horns like a wrestler of large animals.

But really, in the final analysis, I am a ridiculous person.

No one is surprised by that anymore.

The doctor spoke into our machine.

He spoke for a long time.

I sang the G.I.Joe theme song and smacked the figures together even louder so I would not hear him.

FIGHT FOR FREEDOM, WHEREVER THERE'S TROUBLE

IT'S ZARTAN WEARING A FAKE MOUSTACHE WE WERE FOOLED

SCARLETT MAKES OUT WITH GUNG-HO TO ADAGIO FOR STRINGS

Everything of significance he might have said, I drowned out with the power of my imagination.

Up there, waiting in the dark, the red eye of the answering machine blinked.

It called to me.

Come play back the guilt I have here waiting for you.

This doctor loved you and your problems.

Come push play and know how wretched you are.

I drank one Capri Sun, then another.

I rubbed at invisible stains on our basement windows.

Anything, any reason, not to go up those stairs, not to see the terrible blinking of the one red eye.

But time waits for no man, and eventually families wonder why a father might be standing in the shadowy storage area of the laundry room, having not moved for over an hour now.

Damned life; why come you cannot be spent in perfect isolation?

I climbed the basement stairs.

"Are you going to listen to the message?" my wife asked.

Are you going to know the scolding of Dr.Droopy and then welcome Death?

I am a jumpy, excitable person.

Even, when I drink a prudent amount of coffee, I still manage to stutter and vibrate.

Anything beyond that, and I become a yodelling blur of topless idiocy and poor muscle control.

I tell you this because it is the only explanation of what happened next that I can reconcile with and not feel like an utter coward.

My every intention was to play back that message.

But when my hand neared the button, it spasmed. Instead of 'play', it mashed the 'delete' button.

All that he wanted so earnestly to tell to me, lost in a caffeinated stab of finger.

You might argue that I could have called him back, or that somehow science can retrieve things from answering machines.

You would be arguing with yourself however, because I have already left the room, whistling and free of guilt.

As for my problems?

I guess they are still here.