A boy that men make drive

Every year, our administrators evaluate us.


It's not too bad when it's done by supervisors who barely know you and who don't really care. 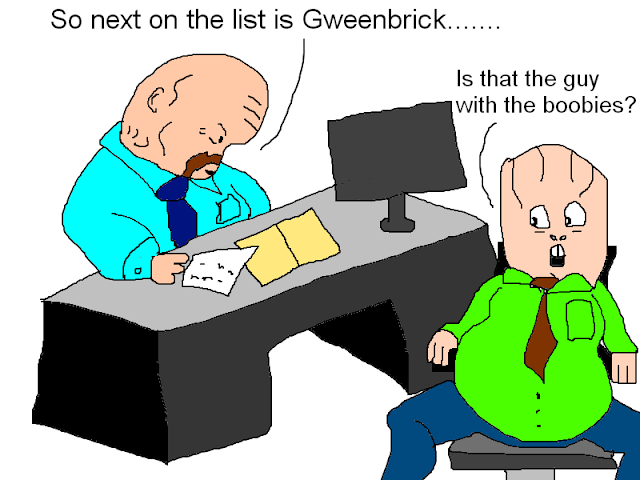 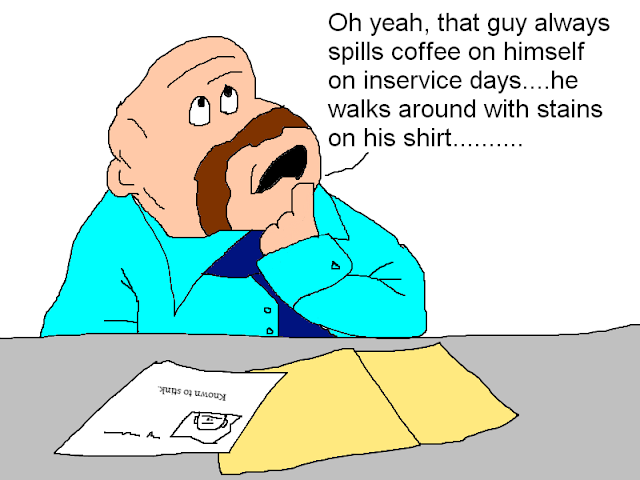 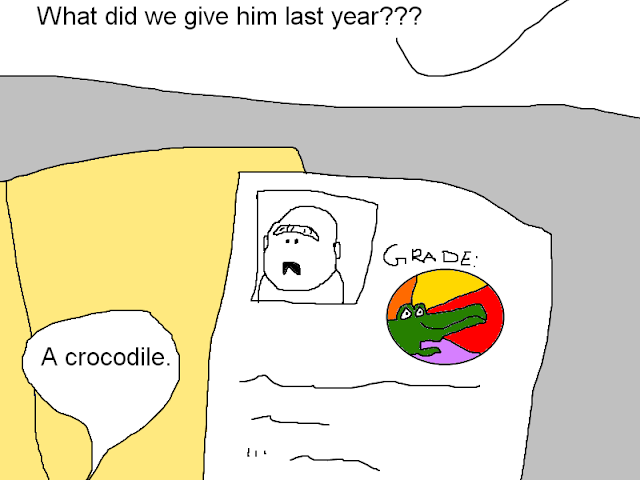 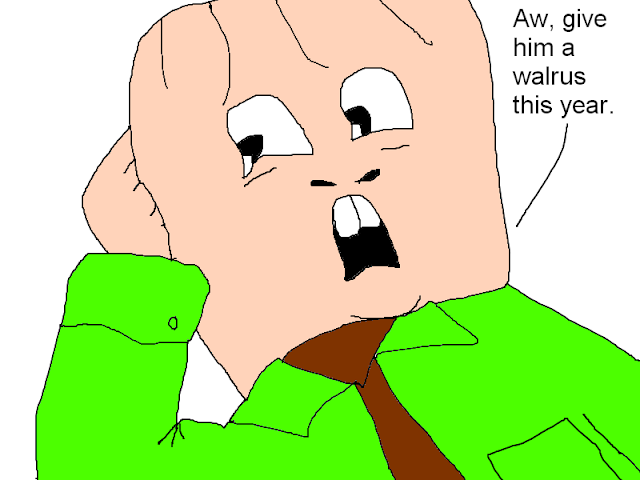 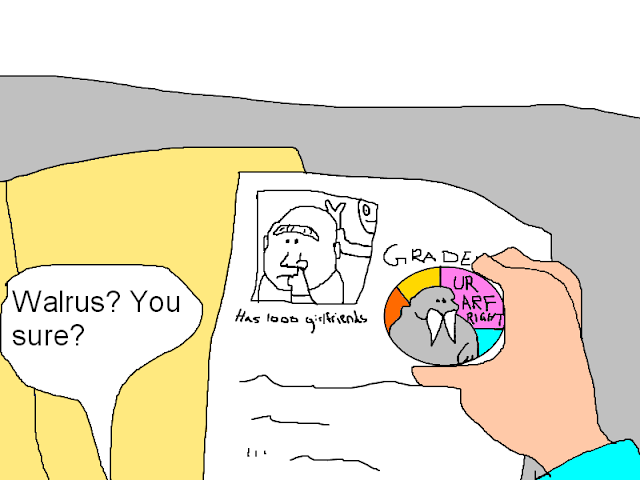 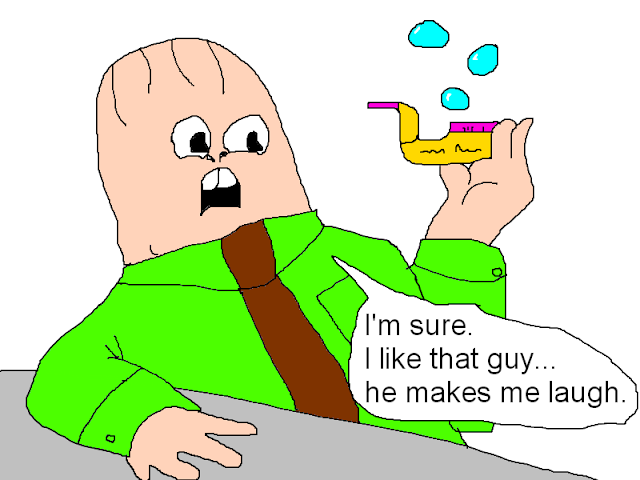 But when it's a supervisor who has actually decided to pay attention to you, it's not good. 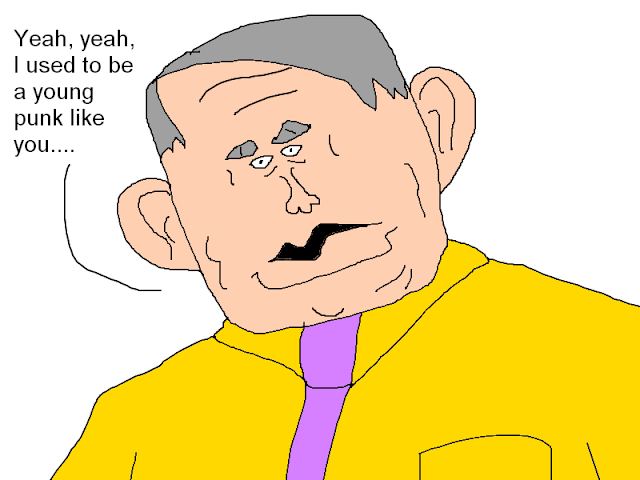 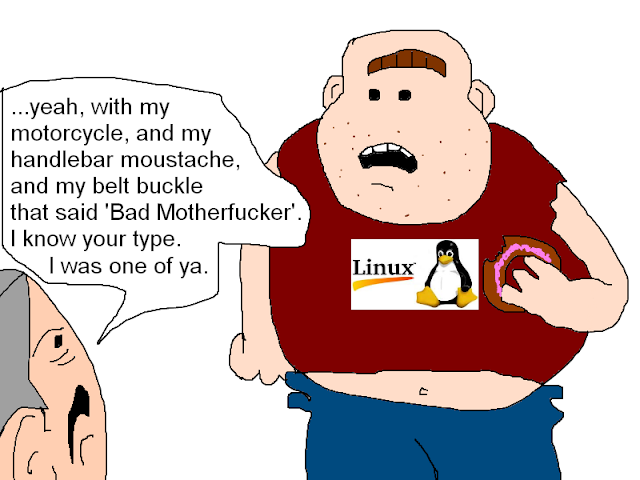 I am not even exaggerating; after saying that, this supervisor sputtered out the word 'motherfucker' like three more times, disconnected from anything else he was saying.


Some men meet me and just think I have a chip on my shoulder; that I am all manitude and need to have a plank removed from the Jenga tower of my ego. 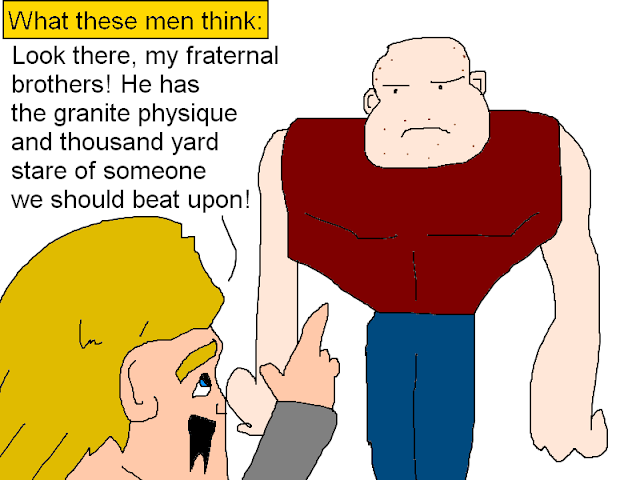 
The squint is from staring at the sun too much when I was little and nearly blinding myself. 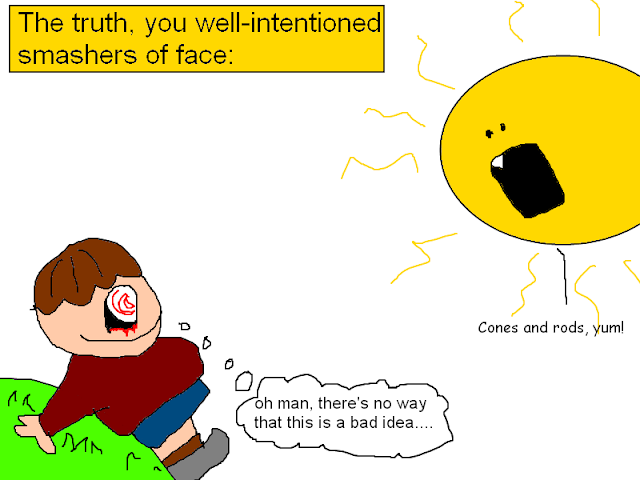 The granite physique, the posture that seems to be all attitude, just needs to be seen from the side for the truth to be revealed. 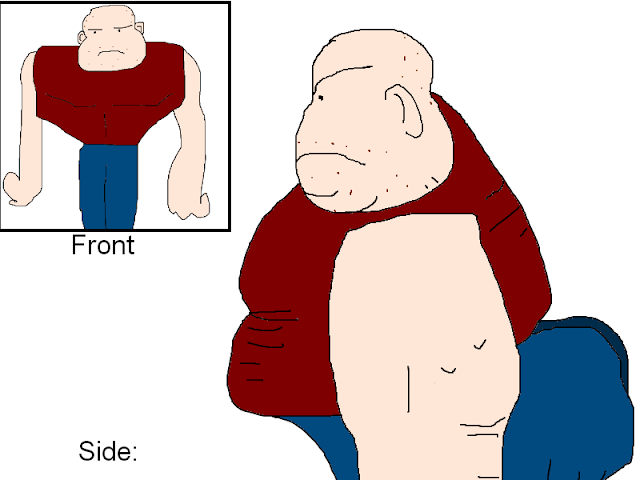 Why is it that men who like to sound the depths of other men never take the time to look at them from the side???

Sometimes I write sentences and think, 'what the hell am I even talking about?' Tee-hee.

Which brings me to Driver's Ed.


My driver's ed teacher was a Crimean war vet who was part metal because the Saxons had rained too many flaming balls of pitch down upon him from the safety of their comfy, comfy castle. 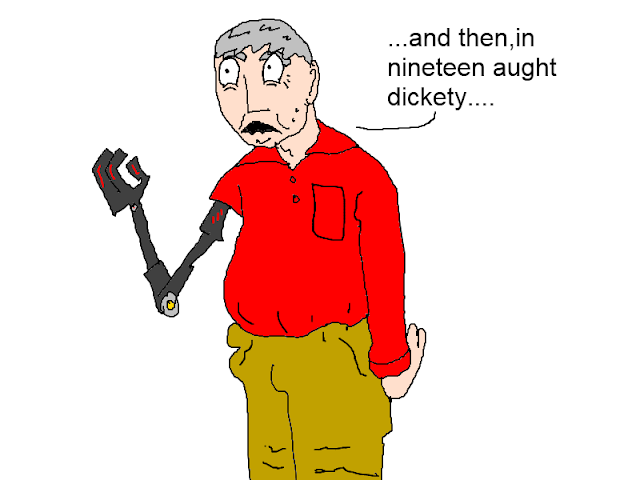 Mr. Jubbs took one look at me and thought, this young punk likes to believe he's too cool for school. Wait till he gets in MY car....I'll turn that Eddie Haskell into a Lumpy Rutherford.

We began in the parking lot.


I began to turn the key, but it was not fast enough.


"Start it! Start the car! Start it right now! Turn the key! Turn it!" 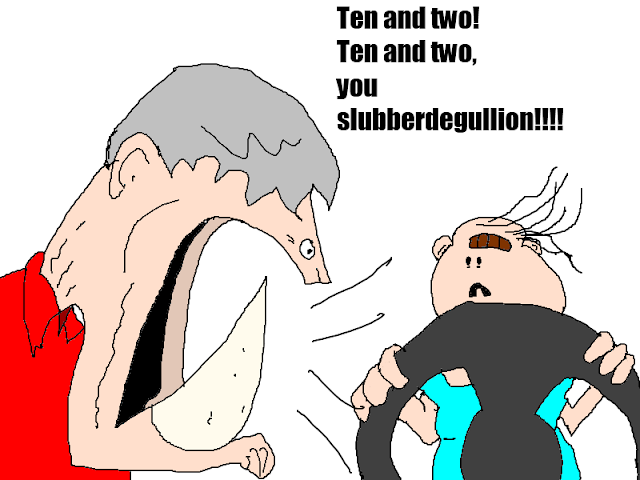 
I was not prepared for this.


There were four people in the car:

Me, now sweating profusely in my favorite sky blue tank top; Mr. Jubbs, his orthopedic robot shoe already planted on the "helper brake"; Inga from Germany, one of several exchange students who ended up in our little town and thought, "Mein gott, how did we lose the war??" 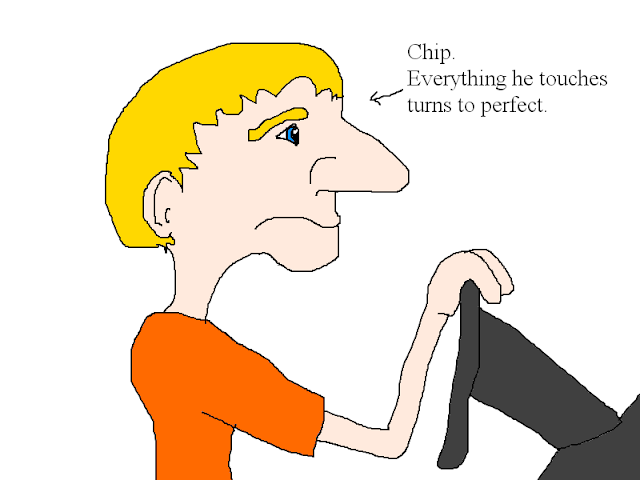 The measure of hatred that Mr. Jubbs held for me was only outweighed by the absolute love he bore for Chip.


You could see it the moment he looked into the backseat and saw Chip there, a glowing little elfin farm boy. 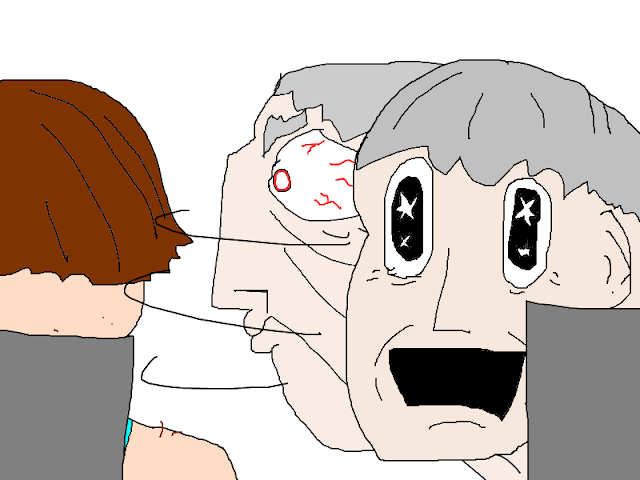 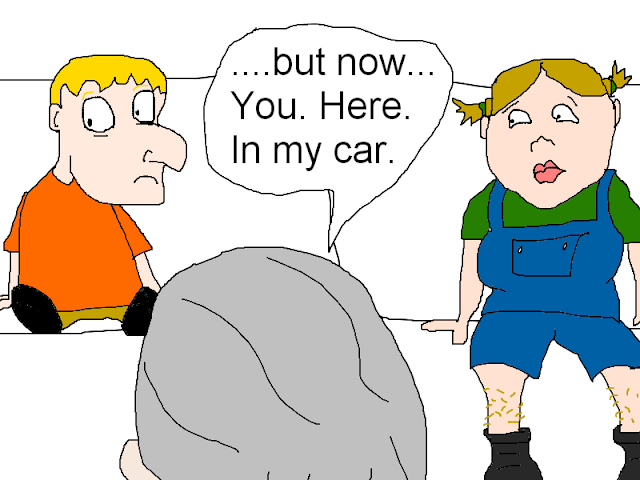 
Mr. Jubbs wiped his eyes and turned his attention back to me.


A long shadow fell across his face.


He squinted up at the afternoon sun.


"Well, get on with it then, let's watch this train wreck happen."


For the first few hours, we went over the basics.


Every mistake I made would provoke Mr. Jubbs into fits of rage.


My third attempt at parallel parking was especially inspiring to him: "You see?? Do you see!?!? This is taking you down a notch, isn't it? Making your pride sting....making it hurt." 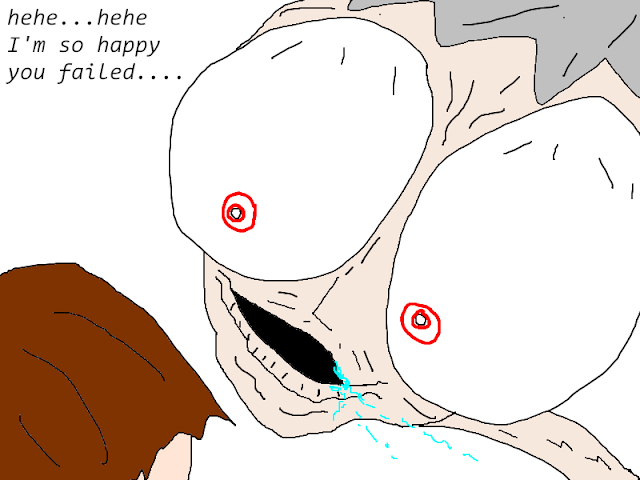 He rocked and sputtered in a fit of angry glee.


When my torture session was over, I crawled into the backseat, utterly spent.


Inga got behind the wheel, and it took Mr.Jubbs three minutes to make her cry.


He took no satisfaction in it though; I guess breaking little German girls who are sensitive, artistic, and far from home is like throwing a water balloon at a fat person.

When Inga finished and climbed into the back seat with me, we hugged each other tightly.

"Yeah? She still make those lemon bars to pass out around the Buck Pole?"

Mr.Jubbs stared wistfully out the window. 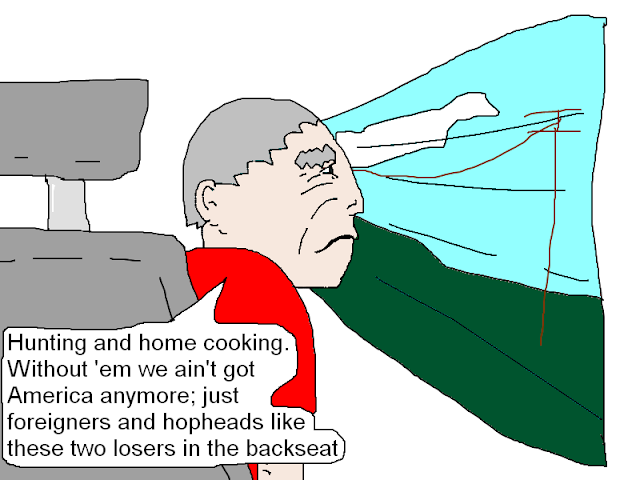 Chip pulled into a gas station.


Mr.Jubbs turned around to fix me with his iron gaze.


"Now Chip and I are going to hit the soda fountain, and I want you to fill up the tank. Can you handle that, Fatty Arbuckle?"


And here for your perusal is one of my secret shames: I had never pumped gas.


I understood the principle at work, sure, a tube goes in a hole and your car can drive again. I wasn't a total idiot. 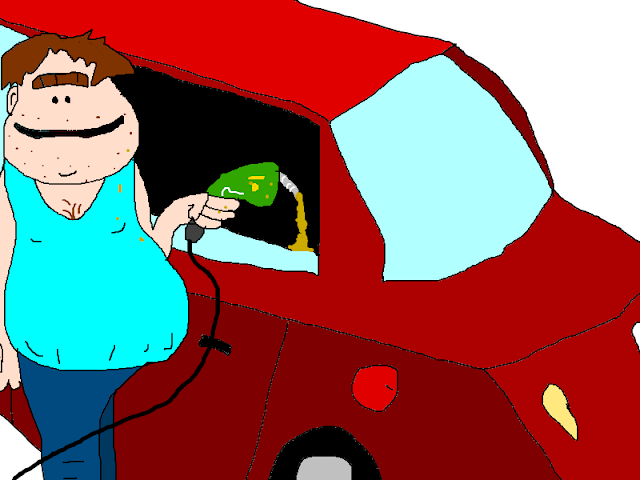 But how do you make the tube talk to the car, what are all those whirling numbers, what's this trigger, what are those sounds??


I looked at Inga for help, but she had retreated to the far corner of the backseat with her hands over her ears, endlessly muttering 'O Tannenbaum'.

Time was running out, and I was alone. 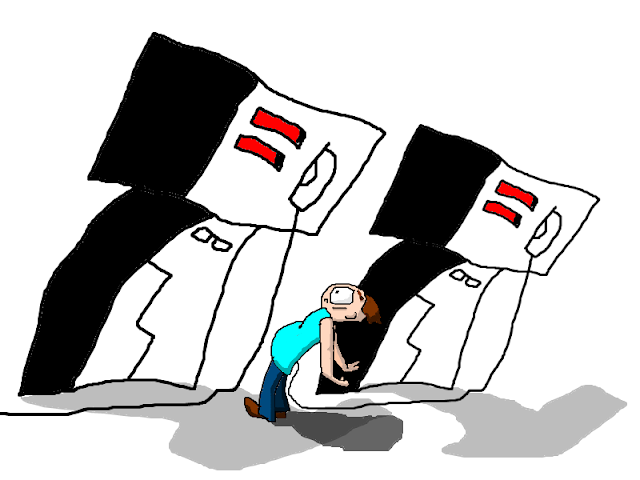 Jubbs and the Chipster would soon be back, and oh how they would have a good laugh at the manboy; his monkey brain so befuddled by the rocket science known colloquially as "pumping gas."


Forget pride; it would be my very sense of self that would be shattered and flung about the street.


I must make gas go into this car. 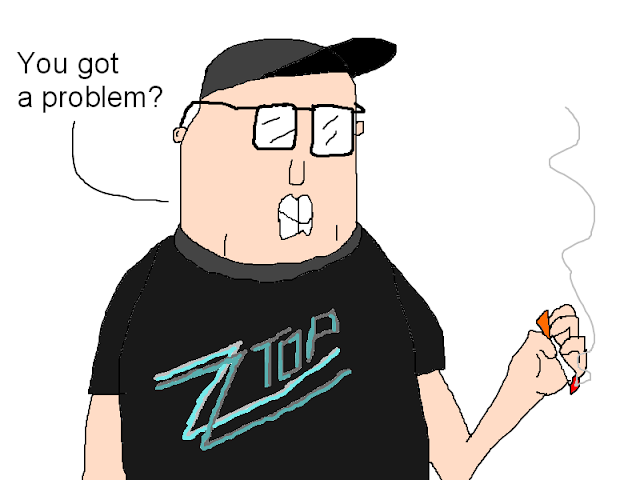 I turned to see a classmate from my high school, one of those trade school kids who disappeared on a bus everyday and returned hours later with secret knowledge of things like "welding" and "print making."


I remember watching him lift one butt cheek off of a chair to make farts in chemistry class. He called it "kickin' bass." It was the first time I had ever seen someone do that.


He looked me up and down, and then nodded, knowingly.


"I won't laugh at you," he said, "least not now anyways. You look like you been beat down enough for one day. I'll do it."


I wanted to hold him to myself and not let go; to sob all my tension, all my grief into the the shoulder of his ZZ Top t-shirt.


If he had hinted at any kind of an opening, I would have been in there, hugging like a bro. 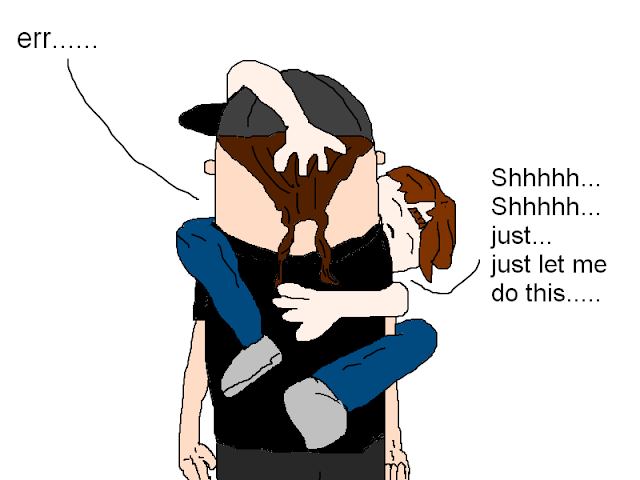 But he just took the pump from my hand and got to work.


I marveled at how his hands flew across the buttons;
so many choices made without any hesitation.


Here was a man, I thought to myself.


He patted me like he was soothing a rabbit who just now had caught its leg in a snare.

Mr. Jubbs was emerging from the gas station.

"You better go," I told my savior.

"All right then." He pulled the brim of his hat low over his face, lit a cigarette, and strode off down the street.

Little farts eked out of his black jeans.

"Who was that?" Mr. Jubbs demanded to know.

"N-n-nobody!" I stammered. And then, sighing heavily, I turned back to the car, back to Chip, back to an undeserved flailing of my imaginary pride.