My houseguests are gone.
When they first arrived, there was going to be an hour's length of time when I would be alone with them.
For someone suffering from crippling social anxiety, this hour would be hell.
But I had a plan.
I had the lawnmower gassed up and ready to go.
When they got there, I would have one foot out the door, and I had my line all ready:
"Sorry to be a bad host, but I thought I would try to catch up on the mowing".
Brilliant.
It all went according to plan, until about three minutes after starting the mower I ran into twenty feet of thick rope that instantly wound itself around the mower blade and caused the whole thing to come to a sudden and terribly loud stop.
I sat for awhile and let the mosquitoes drink their fill.
Then I went in the house.
My guests were seated in the living room, eating sandwiches.
"Um, anyone want to help fix the mower?"
My genius plan had collapsed.
Instead of blissful social isolation, I had to sweat and strain alongside another human person, and make small talk at the same time.
Since I know nothing about mechanical workings or toolish things, I instantly became a small eager child.
"Do you have any open face wrenches?" asked my guest.
"Ok!" I declared, and ran in the house to gather any tools even remotely wrench shaped (this included several sets of pliers) and brought them urgently back to my new dad, proudly laying them out for him.
His hand hovered over each one, then fell slightly, disappointed.
"Maybe this one I guess..." He picked up a rusty wrench and banged around beneath the mower.
"Not enough torque." He muttered.
From his pocket he produced some sort of multi-tool and flipped out a knife blade. He began to hack at the rope.
"What we need is a better knife, something with a good point on it."
The fat little son that I now was scurried back into the house, and returned triumphantly with a slightly bent steak knife which my Ladyfriend assured me she did not care about.
"It doesn't have a point but it is serrated," I said that last word with extra emphasis, hoping to impress. See, new dad, I have man tools and sharp toothy knives for doing man work.
I babbled on about toys and stuff while he slashed away at the rope.
Eventually I felt so tense and awkward that I encouraged him to take a break.
After he was safely inside, I flipped the mower over, spilling gas every where, and tore at the rope like a frenzied ape.
It came loose at last.
I had beaten machine, but I had spent all my energy in the effort.
Too tired now to mow, I hung my head and shuffled back into the house, steeling myself for an unbearable twenty straight minutes of small talk. 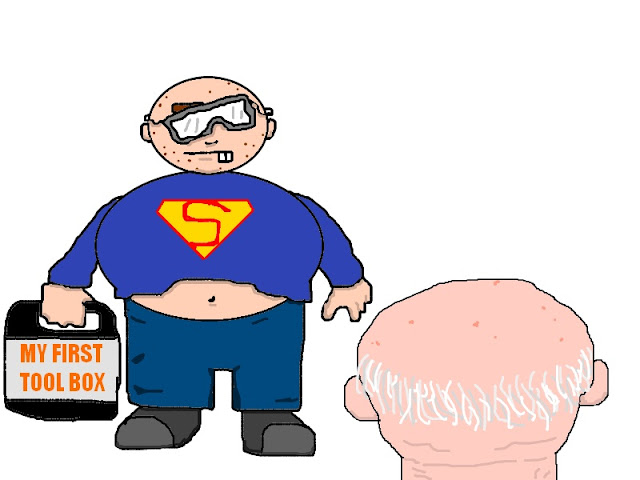 Posted by gweenbrick at 6:40 AM