I got Blog of Note! is what I would be saying here if I got Blog of Note.
In case you are not familiar, Blog of Note is handed out by Google/Blogger daily to blogs they think are especially worthwhile, witty, or other 'w' words.
It translates into more followers, sometimes, and in my case that would be good because I need more material for my groundbreaking series "Profile of a Follower".

The formula Blogger (I keep typing 'Blooger' by mistake) uses to determine Blog of Note is inscrutable, but in the interests of science, I thought a review of several Blogs of Note would reveal a pattern or system at work that could then be exploited for various types of gain.

The most recent Blog of Note is Irish Gumbo.
Its interesting that Irish Gumbo describes himself as a Raconteur; I wonder if he is especially good at it?
My only experience raconteuring was at summer camp, and I swear my compass was faulty because I got completely lost in the woods and other campers had to find me.
I like it that Irish Gumbo has taken Max Headroom for his profile picture: 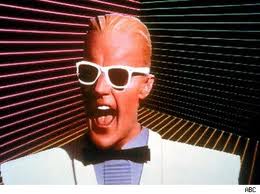 Max Headroom was one of those shows we were Not Allowed To Watch.
Another one was Miami Vice: 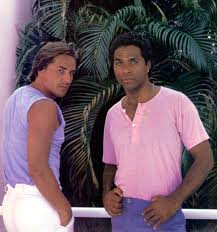 My parents were kind of conservative, and thus uncomfortable with the homosexual lifestyle exemplified by Crockett and Tubbs. I did sneak and watch Miami Vice at a friend's house once; it just seemed like a lot of slow motion and Phil Collins music; nothing overtly gay happened that I can recall. 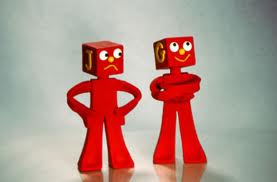 We were not allowed to watch Dallas, but I was never tempted to sneak and watch that one.

Some episodes of some shows maybe should have been Not Allowed to Watch ones, and their dubious quality or uncomfortable subject matter would maybe have made them not sneak and watch worthy.
Like the child molester episode of Different Strokes, or when the Dukes of Hazard found the alien and tried to keep it from Boss Hogg: 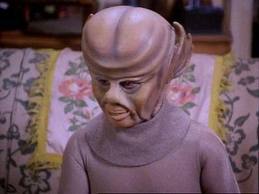 Let me know what you used to sneak and watch, too, and together we will laugh hard and curse our short attention spans that make Blogs of Note like Irish Gumbo so hard to read.
Posted by gweenbrick at 6:08 AM