I know I am going to need some visual aids for this post, but I don't have any.
I know that makes it harder to pay attention to, and I am sorry. I'll try and make many small paragraphs.
I especially apologize to my 7 FOLLOWERS. Yes, seven. Not as perfect as four, of course, but pretty good. Its kind of like I have my own cult. Drink my bath water, cosmonauts!

That being said, I must tell you that you have chosen a most awkward and uncool leader.

I live in a town where lots of people think they are cool, and I have never fit in with any of them. My friends would introduce me to their cooler friends, and a grave, humorless silence would descend upon us all.
You can hear awkward silence.
Its the sound of people who have just met, realizing that they have four hours of the reception left to go and no menus to hide behind.
Its the sound inside your aunt's cocktail party when you have just told an inappropriate story about obese autistic children to your cool cousins from New York City.
Its the sound of an old acquaintance from high school recognizing you (how in God's name? I am fat and bald now-nothing is the same-how can you still see me?!) at a late night diner, and suddenly, so terribly, making himself comfortable. Then, a hippie kid sits on the other side of you, and you are caught between the meeting of two giant, impenetrable intellects.
The high school person asks you how you are doing at least ten times, in between endless tirades about how good his poetry is.
The hippie asks for a french fry.
The high school person wants to talk about literature, and the hippie flips into overdrive. The hippie is writing a novel, an incredibly IMPORTANT novel about when his girlfriend broke up with him in Texas, and the title alone is so awesome, to speak it out loud is to set the air on fire.
He dare'nt speak it, he dare'nt.
But then he does, only after we have all promised not to steal it when we write our own important novels.
"Said Katie", he reveals, and then soberly pauses to let the weight of it sink into us.
I really can't stand it when people say things and pause for impact, if only because I react too early into the impactful pause out of awkwardness or uncertainty. I end up giving inaccurate reactions, i.e. saying "oh"  when I was supposed to softly chuckle, or giggling a little bit when the speaker was waiting for me to shake my head slowly.
Its exceptionally bad when people pause for impact after telling you how much something cost, and you have no point of reference for the item in question. I know that adults give the impactful pause no credence and just say "Is that good or bad?", but people like me, stuck in a gelatinous state of almost-man/basically child, try to fill the pause with all manner of grunts or hums, seeking out the nonverbal equivalent of ending a sentence with a question mark, exclamation point, and period simultaneously.
In this instance, I think I might have nodded affirmatively before he had even finished speaking, which probably looked really cool.
High school friend waits an appropriate length of time before whispering "Kick-ass title, man".
Everyone chews on my French fries, alone with their thoughts. 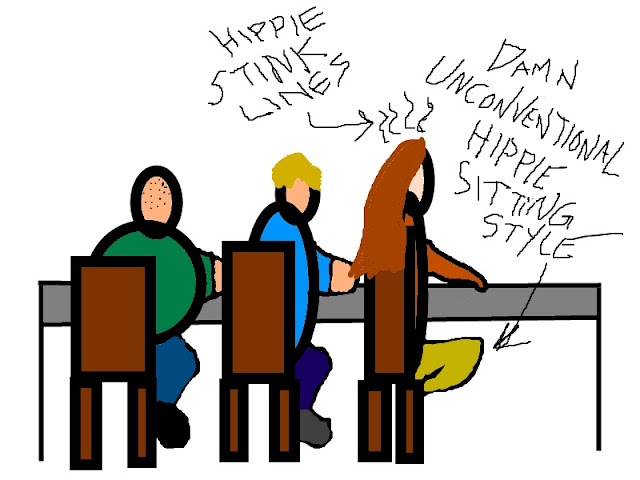 I put myself on the left side accidentally, but I was actually in the middle. After studying the picture, I realized the situation would have been 50% more bearable if I had been sitting on the end, so awkwardness must be proportionate to seating arrangements.