On the left side of the screen, there is a nice little area set aside for my followers. Whenever I feel discouraged, little thumbnails of clareellen, bibblebabble, and danny are there to comfort me; though they have no voice, their mere presence says "Come on, gweenbrick, its not so bad. Why don't you post some more pictures of crappy toys? That always seems to cheer you up." Thank you, my followers.
But unfortunately, there is a deeper wound I am contending with.
You see, there used to be someone else there, in the followers area, his name was David or Matt, I can't remember.
I do not know how he found me, or what made him want to be here, but something he connected with on this blog made him want to follow.
And for a short week, follow he did. His oddly photoshopped little face greeted me with a smile every time I logged on.
But then, for whatever reason, one day he was gone. In fact, it must have been the same day that clarellen joined, because I never saw the number of followers dip below three.
The thing that hurts the most is that clarellen might have joined while Dave/Matt was still here, and for one moment, one brief second where I looked away, I could have had four followers.
Four.
A perfect number.
In the Bible, there are four gospels.
Four seasons.
Four food groups.
The only solution to two plus two.
And I missed it.
I have to admit I am a little angry with big D/M, but I do not want to be petty or resentful.
Instead, I have done what I always do.
Taken a picture of a crappy toy: 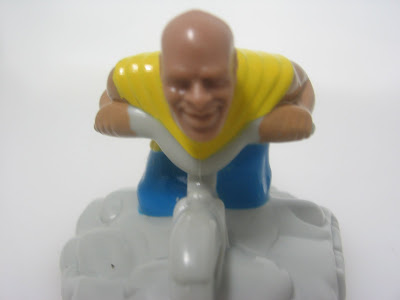 David Matt, until you return to me, you are Shaq in the movie Kazaam, forever riding through the sky on your Mcdonalds cloud bike.
Posted by gweenbrick at 6:31 PM