One Friday a month in special ed world, we go to the movies. Today it was Gnomeo and Juliet in 3D. One kid refused to wear the glasses and watched the smeary, blurry screen for ninety minutes. Another put the glasses on, but rotated around in his seat and stared at the back of the theater for the length of the movie. A girl saved her glasses in her pocket, waiting until she was outside and under the bright sun. She promptly popped the 3D glasses on and adopted the rigid face of all cooler-than-you sunglass wearers everywhere.

After we saw True Grit, I asked a kid what it was about. "That horse shot hisself", he replied.
Right as Rooster Cogburn was barrelling across the prairie to save that little girl from her snakebite, a student yelled out "Kakarot, sit down!!" Kakarot happens to be this guy: 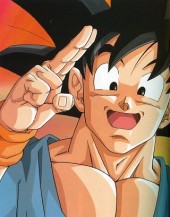 There is a No R Rated Movies policy in our district, but one summer we accidentally took the kids to Deuce Bigalow European Gigolo. About five minutes in, the female newscaster on screen had stripped completely naked and was merrily jiggling about. Panic ensued. Frantic staff called out "Whats this movie rated?!" Students laughed uproariously or made exaggerated cries of "Ewww" and "Gross". There was a scramble to get the classes into another, less controversial film. After we had all settled down in a new theater to watch The Dukes of Hazard(?), I heard a low, slowly building wail and a steady thump of metal against drywall. Upon investigation, I discovered a distraught student in his power wheelchair, ramming it against the theater wall, slowly backing the chair up, and then slowly driving it directly into the wall again. He was angrily sobbing and began to shout, "I want to see the booby movie! I want to see boobies!" A small hole was punched in the wall from the metal corner of his footplate.
I did something that you should probably never do, but I felt it was necessary: I reached down and detached the battery to his chair. For someone in his situation, it was like robbing him of all powers of self-determination.
He cussed at me half-hearted, slumped to one side, and by the time Daisy Duke sashayed onto the screen, he was asleep.
Posted by gweenbrick at 9:44 AM