It is with great pleasure that I introduce the first comment writer ever on this blog, someone by the name of "Danny". I wanted to acknowledge "Danny"'s (not sure about the quotes/apostrophe relationship here) encouragement in a special way, but I had a little trouble thinking of just how to do that. I suffer from mild obsessive compulsive disorder, and for some reason the obsessive part of my brain fixated on the idea of diagramming one of the sentences "Danny" wrote and then using that as a post. Instead, I decided that "Danny" could have a cameo in tonight's product review. Though I have no idea what this "Danny" looks like or what kinds of things he/she/transitional might say, I have chosen what I feel to be a fitting stand-in: 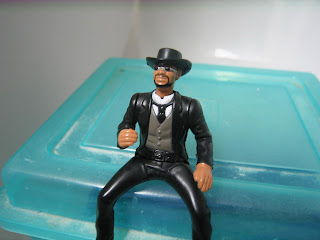 Its a Happy Meal figurine of Will Smith from the film Wild Wild West. Which reminds me of the words on the marquee of my local Pizza Hut: "Dough so fresh Will Smith is jealous".  Every time I pass that sign I feel angry but I do not know why. What is it a reference to? Am I missing something?

Anyways, that has nothing to do with the happiness I feel now that I have "Danny" right here in my home.

Look for his exclusive appearance in tonight's review, and keep reading "Danny"!

Posted by gweenbrick at 6:05 PM